Wondering what to do while in quarantine? Well, you have come to the right place! I have a bunch of suggestions that you can busy yourself with right in this article. BOOKS! Reading is a great way to self-care as it encourages you to sit, relax, and just be. This list has funny cat books, books about real life cats, even celebrity cat books. So what are you waiting for? Dive right in and leave a comment below with your favorite book from this list.

The holidays are coming up soon. And if you’re shopping for a cat lover, look no further than this fun coloring book. The CatDala Coloring Book featured 50 inspirational mantras you can sketch in to your heart’s desire. 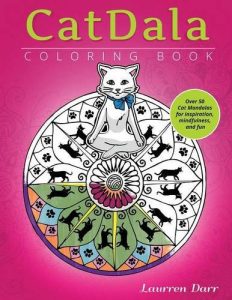 Coloring has been shown to be an effective way to ease stress and calm the nerves. Buy the book at amazon.com for $9.99 (and don’t forget a pack of crayons!).

Bill the Cat is back. On September 13, The Bill the Cat Story: A Bloom County Epic drops, featuring the kitty from the popular comic strip. The cover of the book says it’s for ages “4-33 and 36-89.” The original comic strip was created by Berkeley Breathed in the ’80s, and he penned this new book, too. We can’t wait to see what new adventures are in store for Bill!

Our fave Instagram account, Cats of Instagram, is coming out with their very own book on August 2 (you can pre-order it on Amazon!). The book is a compilation if 400 super cute photos they’ve posted over the years. This would make the perfect gift for yourself or the cat lover in your life!

Looking for your next read? We’d like to recommend Dewey: The Small-Town Library Cat Who Touched the World by Vicky Myron.

The heartwarming nonfiction work tells the story of an abandoned orange tabby who changed the lives of everyone he came in contact with at the Iowa library where he lived. The author, Vicki, found Dewey almost frozen to death in the drop box at the library where she worked one night in the 1980s. She decided to adopt him as the Spencer library’s very own pet.

Dewey, who died in 2006, became so famous that there was even a documentary made about him in Japan! It’s not surprising, given how many lives he touched.

So if you’re a kitty-lover, this is one book that’s definitely worth reading.