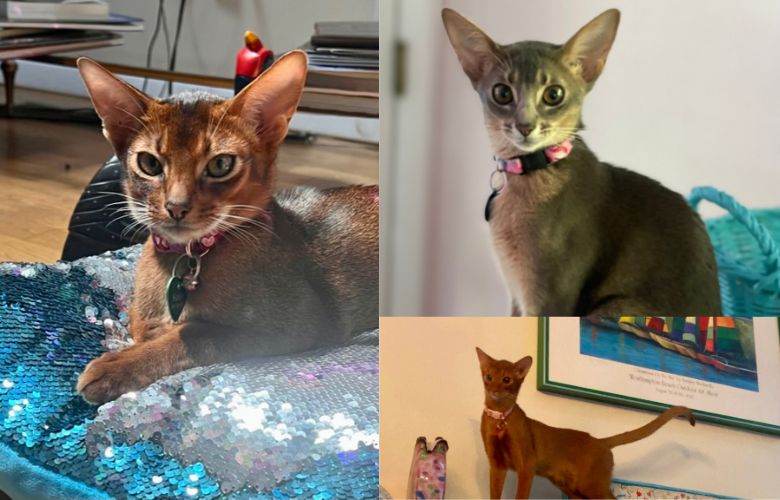 Rumored to be from Abyssinia or current-day Ethiopia, the Abyssinian cat breed most likely originated from Southeast Asia.  The Abyssinian, also known as the Abys is also depicted on Egyptian artifacts and art – leading many to believe that they lived amongst the pharaohs of Egypt.

The Abyssinian cat was introduced o the U.S. in the 1930s but has been around for a very long time.  They became quite popular and are now the 5th most popular cat in the United States.

Their beautiful coats have a ticked pattern which means their hair has both light and dark colors similar to a wild cat like a cougar. Their coat colors include a range of hues including blue, red, fawn, brown, chocolate, lilac, and silver.  A medium-sized cat (8-12 lbs.), with almond-shaped eyes, Abysissan’s eye color can be gold or green.

What makes the Abys especially unique, is its nickname “Aby-silly-an” which may suggest, that it translates to “clowns of the cat kingdom”.  The Abys tend to be super energetic cats that seek high ground as their happy place.  They are also very social and love people and playing games and learning tricks.  They prefer company and do not like to be alone for a long time.

An interesting fact about Abyssinian Cats: the Abys owe their distinct coats to a dominant mutant gene called Ta.  They were the first cat to have their entire genome published.

A personal friend of the people behind All Cats Connected just welcomed a third Abyssinian cat into their home to join adult cats, Amithaba and Kaiki.  They are all currently adjusting to each other. *See and as beautiful and playful as ever. *See photo in the blog