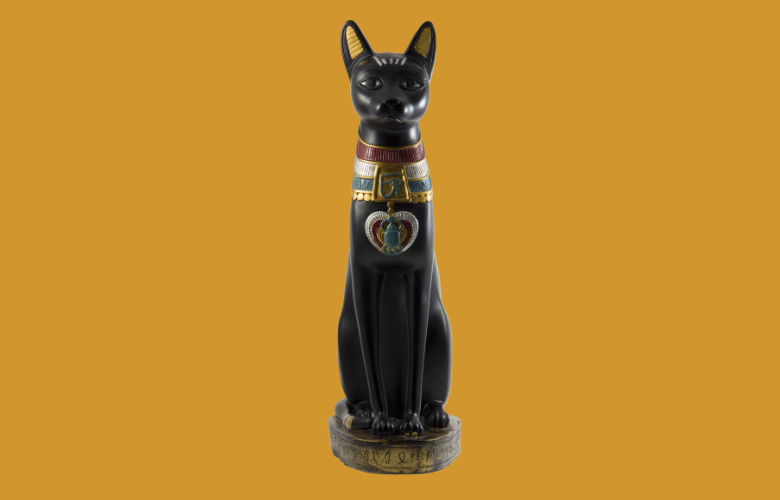 Cats have a certain mysterious air to them; perhaps it is because they have been part of ancient storytelling and mythology since ancient times.  Here are just a few cats found in mythology:

Legendary cats found in Celtic mythology, Cast Siths are said to be the size of dogs with a white spot in the center of their chest.  Legend says that while these cats present themselves as any other feline in the presence of humans, when they are gone – Cat Siths walk upright on two legs.  Known in folklore, people believed if you left a saucer of milk for a Cat Sith on Halloween, also known as Samhain, the household would be blessed with an entity.

Known as a feline deity, Bastet is an Egyptian goddess of home, cats, fertility, childbirth, and women’s secrets.  Known as the daughter of the Sun God, Re; Bastet was a native to Bubastis.  However, it is in Memphis that a cult was formed worshipping the cat deity – amulets and mummified cats in cemeteries were two offerings made to the goddess, often depicted as a cat head’s head on a women’s body.

Sekhmet was born from the fire in Ra’s eyes, the Egyptian goddess of war and destruction.  Monuments dedicated to worship Sekhmet number more than 700.  Sometimes legend tells that she is the alternative form or a sister of Bastet.

Mafdet is another Egyptian deity known as the goddess of justice, judgment, and execution.  She is considered the protector of Ra and looks like a Cheetah.

Cha Kla is a mythological cat from Thailand, told to have blood-red eyes and fur that is black.  Legend says that the Ch Kla are terrified of humans and will hide from them, but if they are seen or touched, that person will eventually die.

Mythology shows the Cactus Cat resembles a bobcat usually seen in the southwestern United States.  Stories say that the Cactus Cat has hair-like thorns, which it uses to slash cacti during the night – comes back to drink its fermented juice a few days later, becomes drunk, and howls throughout the night.