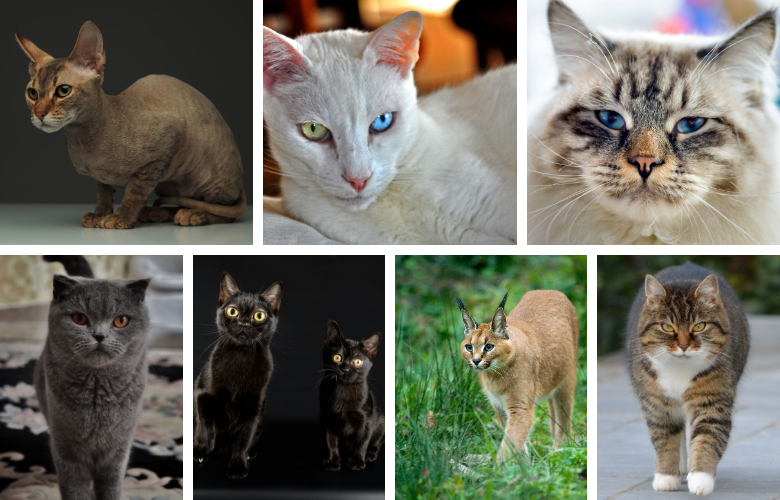 Originally from Russia, the Peterbald was created in 1994 due to experimental breeding by Olga S. Mironova.  The Peterbald became quite popular in St. Petersburg, Russia and 5 variations of coats exist. Bald, flock, velour, brush, and straight.  The Peterbald can become cold very easily and need temperature control to be cared for because they lack hair.  They also require weekly baths to keep their skin free of excess oil build-up on their skin.  Peterbald cats are active and playful, crave attention, and make a great family pet.

Hailing from Thailand centuries ago, the Korat is a small, domesticated cat.  They were traditionally given to brides as gifts. The genetic pool is very small for Korats and they remain a rare cat breed.  It can cost hundreds or thousands of dollars for a kitten.  Known to be very intelligent, Korat cats have a unique silver-blue coat, large green eyes, and live approx. 15 years.    They are talkative and are playful, but can be easily startled.

Called the skogkatt (forest cat), the Norwegian forest cat is from Norway.  They are a natural breed and are naturally curious.  They are outgoing, talkative, and cuddlers.  Due to years in Scandinavian winters, these cats developed an insulated, waterproof double coat to protect themselves.   Featured in folk tales and Norse mythology, the Norwegian forest cats are a very old breed.

A conservation biologist, Karen Sausman, bred an Oriental Shorthair and a Bengal to create the Serengeti cat.  Karen wished to breed a cat that resembled the wild African serval without wild blood.  These cats are patient, friendly, and self-confident.  They attach to people with a strong bond and are affectionate.  Since they are such a rare breed, owners often keep these cats indoors only.  If bored, they can become destructive – but given interactive toys and lots of attention, they are wonderful pets.

Although not domesticated, the ocelot is a rare breed of cat.  The ocelot is a wild cat native to Mexico, the southwestern United States, Central America, South America, Trinidad, and Margarita.  It weighs between 18 and 34lbs on average.  Most active at twilight and at night, the ocelot is a solitary and territorial feline that is very good at climbing, leaping, and swimming.  Prey consists of armadillos, opossums, and lagomorphs.

The cat breed descends from an earlier breed called the Ragdoll, created by Ann Baker which was a mix of the Burmese, Birman, and the Persian breeds.  The reason the Ragdoll was called that was that when they were held they would go limp and placid like a doll.  Later Ragdoll breeders bred a new breed and it was called the Ragamuffin, this breed does not really go limp when held and is a good family cat.

Geoffrey’s cat is a wild cat that lives in South America, mostly in the Andes of Bolivia, Brazil, Paraguay, Argentina, Uruguay, and Chile.  Hunting and trade of this cat are prohibited because their population was endangered by a boom in cat skin trade between the 1960s and 1980s in addition to deforestation.

This breed was one of Britain’s first pedigreed cats, appearing in cat shows in England in the late 1800s.   British Shorthair cats are intelligent, affectionate and bond well with humans, in addition, they are calm and easy-going.  These cats were originally from Rome and brought to Britain as they were good mousers.

The Turkish Van is an ancient breed of cat, originally from Turkey near a Lake Van.  With a history that goes back to 6,000 BC and 3,000 BC, the Turkish Van is one of the oldest breeds in the world.  The Van is protected from extinction now and can no longer be taken from Turkey.  They are bred in America and Europe, although only 100 or so per year, so they continue to be quite rare.  They are adventurous, playful cats that develop strong relationships with their humans.

Bombay cats look like miniature wild panthers, with a sleek ebony body and coppery eyes.  You may think they come from Bombay, but they actually originate from an American breeder named Nikki Horner who wished to breed a domesticated cat that looked like the black leopards of Bombay.  They are drawn to heat sources and will sit by a sunny window or on a lap to stay warm.  They are clingy and nicknamed “Velcro cats” since they often will follow their humans from room to room.  They are also good with strangers and are highly social cats.  Since they are so social they can suffer from loneliness and depression if left alone too long.

So there you have it, some of the 10 rarest feline breeds in the world.