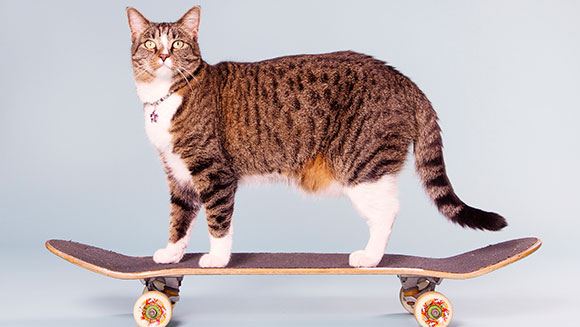 I’d like to introduce you to a feline who has reached new records among the cat world, Guinness World Records to be exact. Meet Didga, short for Didgeridoo, the adorable kitty who set the record last year for most tricks performed by a cat in one minute. She broke records when she successfully completed 20 tricks, back-to-back, placing her in the famous Guinness Book of World Records for 2017. If you were wondering, her tricks range from rolling over to jumping over a bar while riding on a skateboard. However, when she’s not competing Didga enjoys spending time with her fur-dad, Robert, and eating her favorite food – raw kangaroo mince. Yum! But can she beat her record in 2018? Exciting News! Didga’s on par for breaking her current record of 20 tricks in one minute as she was able to complete 24 tricks earlier this year. Let’s cheer her on for 2018!